Lets explore what we know  or think we know  about who incorporated what styling elements in their designs first.

Many an article will tell you that Harley Earl's Buick Y-Job was the first car with hidden headlamps. Ironically, they were penned by Gordon M. Buehring, as part of a design he entered in a competition while employed at GM. Earl dismissed the design as having no face. Buehring quit soon after.

As incorporated in Buehrings 1936 Cord 810, on the front of the cars fenders, they were attractive when shut, and were of little aerodynamic detriment when opened. Somewhat similar hidden headlights on the 1942 Desoto were the first series-production car in which the opening and shutting of the lamps was not a manual function. (The Cords headlights were opened with tiny cranks on either end of the dash.)

The next big push in hidden headlights was on sports and GT models, where they ostensibly made the car more aerodynamic. Ironically, in most cases the sleeker the car looked with the lights concealed, the more detrimental the effect of the open lights was to the aero drag on the car. Another drawback to hidden lamps was that they didnt get cleaned when the car was washed, unless the driver remembered to open them.

Rendered mostly obsolete by todays amorphous headlight clusters which are flush with the body, hidden headlights are pretty much gone now.

I have a feeling they will be back, like a bad penny.

One aspect of automotive styling that is universal today is a curved, one-piece windshield. The visibility afforded by the lack of a center pillar was a real improvement over previous attempts to streamline cars by splitting the windshield and sweeping the outer edges backward, as on airplanes. While you would expect such a feature on a car synonymous with early aerodynamic styling  the Airflow, only the top-of-the-line Chrysler Airflow CL had a curved, single-piece windscreen .

Of debatable merit, quad headlights burst onto the scene in the 1950s, and were all the rage in the Kustom world. Though GMs adoption of quad headlights in 1958 (which were an ugly add-on to the previously sweet-looking Corvette, and part of the busy and ugly-looking 1958 Chevy sedans) is most peoples recollection of the beginning of this trend that just wont die, American Motors get the dubious honor of beating them to market with their quad-headlamp 1957 Nash Ambassador. Like late 50s designs, and scads of 1960s and 1970s models from all of the big three and American Motors, the Ambassadors headlights were stacked, one atop the other, on each side of the grille. Thankfully, in 1959, American Motors hired Dick Teague, who would re-kindle AMCs loose collaboration with Pininfarina, and who would pen the handsome Javelin, AMX, Hornet and the fist compact sport-utility, the Jeep Cherokee .

But thats a story for another time .

In 1965, BMW introduced 1965 2000C. The designer, Wilhelm Hoffmeister, is credited with first penning the little forward wedge at the base o f the C-pillar that has become a BMW design hallmark known as the "Hoffmeister kink." The same styling cue has not only adorned nearly every BMW since but also many a would-be Bimmer from other manufacturers. However, the copy-cat was not Lexus, nor Infiniti, etc .

The copier was Hoffmeister himself. Said kink on the rear quarter window was a feature on Dodge Dart and Polara models in 1960.

So maybe we should call it the Exner Kink?

Fords 1949 designs were seen as a major breakthrough, with a design that, while somewhat porky, flowed from front to back, with no discernable separate rear fender. However another car that Ford built, but did not design, had such a feature 10 years before, though it was not was designed for sleekness, but for ease of construction and lack of complexity.

By 1939 the military needed a new, universal vehicle to replace the motorcycle and its other vehicles (such as the modified Ford Model-T), so they invited 135 different car companies to compete for a contract to build a new vehicle for the military.  The vehicle had to meet certain specs, such as a payload capacity of 600lbs, a wheelbase under 75 inches, a fold-down windshield, a gross vehicle weight of under 1200lbs, and it must be four-wheel drive.

Only three companies entered: Bantam, Willys-Overland, and Ford. Bantam enlisted the help of Karl Probst,and in 1940 was the first to produce a working prototype for the military, dubbed the Bantam Blitzbuggy and "Old Number One". Willy's-Overland and Ford soon followed with their own prototypes, the Willys Quad and the Ford Pygmy, which were basically knock-offs of the Bantam car. Willys eventually won the contract because of their 60hp "Go-Devil" engine, but Ford was also given a contract to help keep up with the military's demand for the vehicles for use in WWII.  Willys later renamed their jeeps the MA and the MB, while Ford called theirs the GP and GPW. 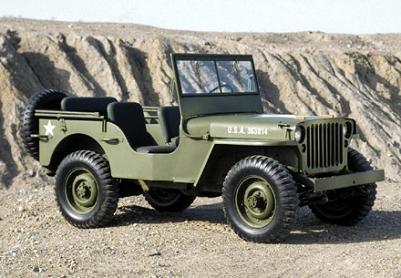 The 1938 Cadillac Series 60 deserves, in my opinion, special mention for a variety of firsts or near-firsts, brought together on a well-designed car. First, the elimination of running boards  a risky move for a brand with such a conservative clientele  allowed Harley Earl and his team to widen the sides of the body to be parallel with the outside surface of the wheels, allowing for a wider interior. This same design also saw all four doors front-hinged, a simple and logical idea which would be widely copied. In addition, an extended deck, a "first" for a production automobile, transformed the trunk from a strapped-on afterthought to an attractive styling feature. Finally, this tasteful design incorporated a low belt line, tall windows and slim pillars, which provided a very modern look, an early precursor to hardtops yet to come, although a slim center pillar was part of the design. All in all, this car  the forerunner of todays 3-box designs - did much to move automotive styling forward.